Museum gift shop worker, Steven Grant (Oscar Isaac) has problems. He’s rubbish with romance, his boss won’t give him a promotion despite his encyclopaedic knowledge of all things Ancient Egyptian, and he has to cuff himself to the bedpost every night to stop some quite extreme sleep-walking. As in, wake up in a different country sleep-walking. Trouble is, finding out what’s going on might be the worse thing to happen to mild-mannered Steven…

Because as it turns out, he has an alternate personality sharing his body: Marc Spector, a mercenary and bad-ass who also turns out to be the superpowered avatar of the god, Khonshu (voiced by F Murray Abraham). Khonshu’s pretty big on vengeance and punishment, but not enough for his former avatar, Arthur Harrow (Ethan Hawke), who’s switched allegiance to the goddess Ammit – who happens to think the justice should be meted out before the crime.

So… another month, another Marvel TV show, eh? But please don’t let that put you off, as this is the least-Marvel-y MCU show, with no ties bar a few tiny comments easily missed/ignored. I think that might be behind some of the criticism levelled at it all, but I think this might be my new favourite! From the Ancient Egyptian aesthetic and mythology – love it – to a huge character arc of all emotions from Steven/Marc, and of course plenty of action.

Top of the reasons is an absolutely amazing performance by Oscar Isaac, vaguely dodgy London accent aside, as he switches perfectly between innocent Steven and world-weary Marc. The superpowers have come at huge cost, but as the series progresses we discover the tragic cause of the dissociative identity disorder, as well as what led to Khonshu’s involvement.

Big pluses for not making the series an origin tale, although we get that in a quick flashback. Instead we pick up with Marc a long time into his service, and growing weary of it. But Harrow’s ‘scales of judgement’ has to be stopped, and Steven/Marc have a lot of self-discovery to do. We also get a kick-ass female, with Lyla (May Calamawy) not relegated to the helpless love-interest one little bit.

It’s hard to say more without spoilers, so I’ll stop there. Some have criticised an ‘inconsistent tone’ in the show, but I loved the sparks of humour, the contrast between Steven’s almost slapstick incompetence, and Marc’s brutal efficiency. Most of all I loved the focus on the personal journey, more than the world-threatening backdrop. Oh, and it managed to surprise me so many times, although that might not be the case for anyone familiar with the comic book source.

Alas, sounds like a second season is unlikely, but I think this might remain one of my favourite MCU shows. It gave me more of a satisfying story than I expected, mixed action, tragedy and emotion, looked amazing, and left me wanting more for all the right reasons. 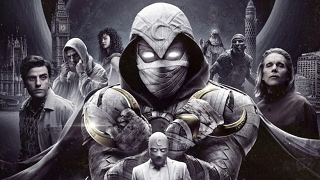